Rainwater in the news...

A slow-motion Colorado River disaster
It may take federal disaster relief to offset the consequences of water scarcity in the Southwest.

 
The high water mark for Lake Mead is seen on Hoover Dam and its spillway near Boulder City, Nev. After back-to-back driest years in a century on the Colorado River, federal water managers are announcing a historic step to slow the flow of water from a massive reservoir upstream of the Grand Canyon to the huge Lake Mead reservoir behind Hoover Dam near Las Vegas. (Julie Jacobson / Associated Press / April 15, 2013)
•      Saving the Colorado River -- from us
•      The drying of the West 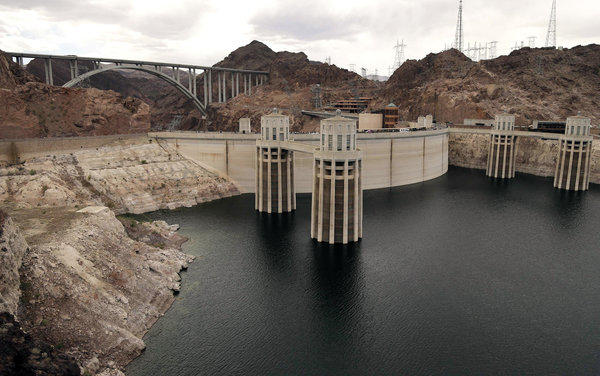 On Aug. 7, the head of the Southern Nevada Water Authority called for federal disaster relief to address the consequences of water scarcity in the Colorado River system. On Friday, the Bureau of Reclamation announced it would be forced to cut the flow of water into Lake Mead in 2014 to a historic low. Dominoes may now fall from California to Washington, D.C.
A nearly century-old body of agreements and legal decisions known as the Law of the River regulates water distribution from the Colorado River among seven states and Mexico. Two major reservoirs help collect and distribute that water. Lake Mead disburses water to Nevada, Arizona, California and Mexico. Mead gets its water from Lake Powell, which collects its water from Utah, Wyoming, Colorado and New Mexico. For the first time, Lake Powell releases will fall below 8.23 million acre-feet of water, to 7.48 million acre-feet, potentially reducing allotments down the line and setting off a cascade of significant consequences.
First, if recent dry weather in the Colorado River basin continues, declining water levels in Lake Powell could cut off power production at Glen Canyon Dam as early as winter 2015, affecting power supply and pricing in six states.
Second, less water coming into Lake Mead from Lake Powell may bring the level in Mead below an intake pipe that delivers water to Las Vegas by spring 2015. The Southern Nevada Water Authority has been racing to construct a deeper intake pipe by the end of 2014.
By winter 2015, Lake Mead also may dip to a level that would result in a major decline in power generation at Hoover Dam. That would affect the supply and cost of power for consumers in Nevada, Arizona and California. Southern California uses below-market-rate power from Hoover Dam to pump water to its cities and farms; if the region was forced to buy market-rate electricity from elsewhere, the price of water for Southern California consumers would surely rise.
These Bureau of Reclamation projections prompted Pat Mulroy, general manager of the Southern Nevada Water Authority, to call for federal disaster relief to mitigate the situation. She wasn't specific about how much money would be needed or how it would be used, but disaster relief could go toward completing Las Vegas' new intake pipe project, or for things like paying farmers to temporarily fallow their fields as a means to get more water in the reservoirs, or to finance a controversial new groundwater project in the region. Mulroy referenced Superstorm Sandy and said: "Does a drought not rise to the same level of a storm? The potential damage is just as bad."
If anything, Mulroy is understating the situation. What's at stake on the Colorado River, in addition to increased power and water costs, is drinking water for 36 million Americans, irrigation water for 15% of our nation's crops and a $26-billion recreation economy that employs a quarter of a million Americans.
"Disaster relief" implies temporary measures, but the drought in the Southwest is not an isolated incident; it is a long-term reality. We need strong measures to head off further disaster, not just aid to help address the aftermath.
Demand on the Colorado River's water exceeds supply. According to a 2012 Bureau of Reclamation study, average river flow could decrease by nearly 10% by mid-century. Carrying on with business as usual by continuing to build new diversions from the river and failing to significantly improve the efficiency with which we use the river's water is akin to rebuilding wiped-out beach homes after a hurricane and then beckoning another storm to come in and destroy those homes again (requiring, of course, another government bailout).
Fortunately, that 2012 Colorado River study determined that urban and agricultural water conservation and recycling, along with market-based measures like water banking, are cost-effective measures that can lead the way to a secure water future for the Southwest. The Department of the Interior has convened a process with the seven Colorado River states and other interests to determine the next steps on water conservation and improving river flows. A report from the group should arrive next year. A robust plan is needed from this process to ensure a successful economic future for the Southwest, or else the dominoes will fall.
Craig Mackey is co-director of Protect the Flows, a network of businesses that advocates for healthy flows in the Colorado River and its tributaries.
http://www.latimes.com/opinion/la-oe-mackey-colorado-river-drought-20130819,0,2138689.story